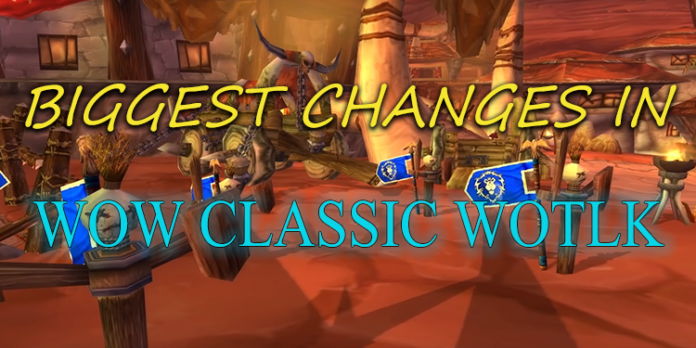 With the announce of the Wrath of the Lich King Classic official releases on Monday, September 26,2022, a large number of TBC players start preparing for the pre-patch. Moreover, there will be lots of changes in WotLK from minimal things to the massive updates as well. Today I would like to introduce some of those changes in WotLK and hope those intros could help you a lot in your new adventure.

The first thing that will change is the manual buff. If you are a TBC players and unfortunately the class that have to provide manual buff in the raid before, I believe you totally understand how annoying it is to buff your whole team. You have to buff your team members one by one and cast it on five different players, sometimes even eight. The good news is in Wrath of the Lich King you do not have to do the same frustrating thing anymore. Now every manual raid buff like Arcane Brilliance, Prayer of Fortitude and Gift of Wild etc., are no longer needs to target on every players. In WotLK you just have to click a spell and it will give the buff to the whole team, save a ton of times and mana as well.

Secondly is about the mana, in Wrath of the Lich King mana issues for DPS are no longer exist, except for Arcane Mages, no matter what class you’re DPSing with, you will not run out of mana anymore. That’s mainly because it’s just way easier to keep up buffs that regen mana up on bosses now, and also because abilities straight up cost less mana overall. For healers, mana issues is a little bit hassle, but you can definitely make it better with well timed raid cooldowns like Mana tide or hymn of Hope, and it depends from fight to fight of course. Overall you’re still very much trying to preserve your mana as a healer unlike a DPS.

Number three, the integrated quest helper, this made it to the game in Wrath and it basically shows you clearly and easily where your quest objective is and what you need to do to complete it, and this will probably save you hours of hassle while leveling and doing quests, which makes it easier for you to get the WOW WOTLK Gold you need for your basic quality of life.

Moreover, there is also a big change in riding system. The first riding skill you can learn when you at level 20 instead of 30 anymore, Lourneyman Riding at level 40 and first flying skill: Expert Riding at 60. The Snowy Gryphon could also provide you 150% flying speed, and all skills are much cheaper than TBC to make sure you can learn in fast and efficient ways.

Then the next one is about mounts. The Icecrown and Stormpeaks are designed to travel with a flying mount, so you better have one when you at level 77. If you do not have enough golds for buying flying mounts, you can find a goblin NPC outside the K3 and borrow a flying mount from him. But this mounts only could be used in Storm Peaks, Icecrown and Sholazar Basin.

Additionally about the Meeting Stone, there is no requirements of level any more. You can use the any meeting stones at level 15, which solves a lot of hassles and saves times.

The Tabards also changed in the Wotlk, in Wrath when you equip the tabard, it could give you a buff that help you gaining reputation in the level 80 dungeons. Which means tabard is no longer a well designed outfit that just show off your exalted anymore, it has some place could be used now.

On top of that the training dummies are finally appear in the Wrath, I guarantee that it must be a very popular change. In TBC when you try to test your class abilities or your new weapon damages, searching targets must give you a lot of hassles. Now in Wrath you do not have to hit ghost ogres or travel to the Black Temple to hit the pit lord, the training dummies were added around every city in Azeroth. The training dummies are actually boss type enemies and little group of mods as well, which means you can test almost everything you want to test on those training dummies.

Finally one more thing I also want to mention is that the with the change from this big update, the stability of currencies in the WotLK would be uncertain because of the gold farming efficiency changing. Thus for most of players have enough gold deposit in your account is a big problem, since farming gold will take a ton of your times and energies.

Here I recommend MMOWTS.com as your best assistant for WOTLK Classic Gold supplier. If you want to get more powerful gears like weapons or armors, or do not have enough golds in urgent, MMOWTS.com would be your best choose for getting golds. In MMOWTS you can find cheaper gold compare other websites. We also have 24/7 online serve for any issues you probably will meet during the purchase, moreover we also support refund if there were any delivery problems. So there is no reason just waiting, click the link and enjoy a more smooth adventure than ever!