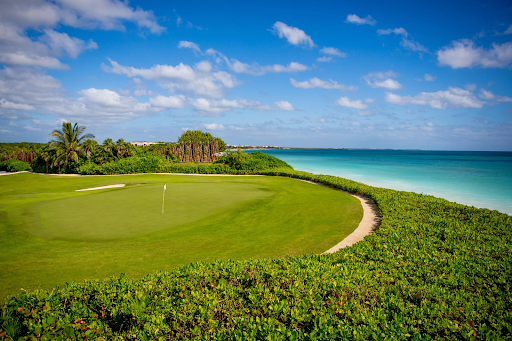 Ideally, Mexico’s breathtaking natural structures and especially its striking contrast between the desert and seaside surroundings make it perfect to enjoy some world-class golf in the glorious weather. When Mexico alone serves the most scenic areas of the city, it is also surprisingly a rich golf destination, home to various superior Jack Nicklaus and Robert Trent Jones’ signature designs, some of which offer dazzling seaside vistas.

Let’s have a look at the top five golf destinations in Mexico to boost your sense of adventure and challenge.

The tropical Mayan rainforest, mangrove wetlands, and seashore are just a few of the various ever spectacular sights that this Greg Norman masterpiece treats to all sportsmen. El Camaleon Mayakoba got its name when the first PGA Tour event was held outside of the United States or Canada, the Mayakoba Golf Classic, which often serves as a world-class field every year.

The innovative course layout includes some real subterranean caverns as well as a few dazzling par-3s perched on the brink of the Caribbean Sea. The resort, which is surrounded by six miles of glistening freshwater canals, has four luxury hotels and private dwellings. To the northside, also in Quintana Roo, is the spring break destination that is today a golfers’ paradise of Cancun. Together, they create a fantastic golf destination.

Two of Mexico’s most astonishing courses are currently located in the famous Baja California region of Los Cabos, which was formerly a small fishing community. The incredible Ocean Course at Cabo del Sol, which Jack Nicklaus built, is the pioneer of this golf revolution.

The Ocean Course, unquestionably one of Nicklaus’ most significant accomplishments, is a must-play for all serious golfers and features a fantastic collection of holes that weave through desert sagebrush and open up to provide breathtaking ocean views. The resort offers two exquisite hotels, the Grand Fiesta Americana Los Cabos and the Sheraton Grand Los Cabos Hacienda del Mar, in addition to a world-class golf experience.

One of the world’s best golf courses may be found at the southernmost point of Baja Sur. Quivira Golf Club, one of about a dozen Jack Nicklaus signature designs in Mexico, is located on granite cliffs with a panoramic view of the Pacific Ocean. It has also been shown as one of the top golf courses in the world, alongside Cabo del Sol.

Quivira is more than just a marvelous golf course; it is located on 1,850 acres of oceanfront property with three kilometers of virginal beaches. Accommodations often highlight a luxurious beachside resort, classy villas, and The Towers at Pacifica, a chic new hotel with private plunge pools, butler service available around-the-clock, and a beachfront restaurant.

Palmilla Golf Club is renowned as the ‘Grand Dame of Los Cabos plays’ for its 27 holes of premier golf and breathtaking ocean vistas. Palmilla, Jack Nicklaus’ first golf course design venture in Latin America, is still regarded as one of Mexico’s top signature designs. Golfers can explore the One & Only Palmilla off the course, an amazing hotel situated in the breathtaking Baja Peninsula landscape.

The resort, which was built in 1956 as a retreat for the president of Mexico’s son, has hosted a number of famous guests, including John Wayne and President Dwight Eisenhower. Palmilla truly has it all, offering beachfront access to one of the few swimmable beaches in the area, a Michelin-starred chef, and Mexico’s most renowned destination spa.

The Vista Vallarta Golf Club has two high-elevation courses that were made by renowned players Jack Nicklaus and Tom Weiskopf, respectively. It is often highlighted as one of the best and most beautiful golf destinations in Mexico. Both members and non-members can take their time and play 18 holes here.

This stunning Jack Nicklaus-designed structure, which was the site of the 2002 WGC-World Cup, is spread across former ranchland at a height of about 500 feet above sea level, with a few holes being pushed to the foot of the Sierra Madre Mountains. It strikingly delivers views of Banderas Bay. The holes are framed by enormous ficus trees, tall palm trees, and grassy hillsides, with a web-like network of creeks and arroyos in play.