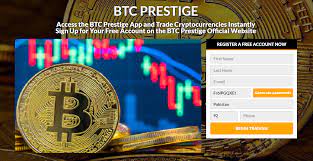 There’s a lot of great crypto trading tools and bots available online for helping you out with trading, but there are also scams to be aware of. BTC Prestige is one of these robots that claim to grant you a consistent and profitable trading experience.

The reviews on this robot online are mixed, which begs whether the people behind this are legit, or is it just another scammer trying to rob you out of your money and personal information?

Analyzing the claims and suspicious activity

First of all, even the most amateur crypto trader would know that returns in this market are not guaranteed, and anything can happen. So, when you tell me that a bot can guarantee where the prices are going, that claim defies even the most basic common sense. Guaranteeing profits in this trade is a huge red flag that this app is a scam.

They claim to have an 82% win rate. However, this is far from the truth. After investing in this bot, what’s coming to you is nothing but a streak of losses! The accuracy is among the worst, and the losses start appearing right from the start.

The general information that should be available, such as the parent company’s name, is not listed on their official site. Like other similar scams, this one also doesn’t include information on how the bot works, the algorithm which predicts the results, and the data on which the algorithm makes its decision.

The trade signals they give you are to keep you engaged and invest even more of your money which isn’t returning profits but instead going into the pockets of your scammers. Don’t deposit anything into this robot unless you like being robbed out of your money.

The reviews and testimonies on the official site are fake, and the authors are made up. They used stock photos in the profile pictures of the users.

Legitimate bots work in conjunction with brokers recognized by an official agency. This is a good way to properly make your decision since you get enough data. However, this bot doesn’t list any regulated brokers on the site. There’s no information about the regulation, so you don’t know where your money is going after investing.

Safety to register on the site is an extremely important point to consider when looking at these scams. Most legitimate bots have policies to ensure users’ data and information safety. This bot, however, doesn’t care about the user’s data security and most probably shares that information with a third party. There have been reports from users stating that they received strange emails after signing up on this platform. A legit robot would not only reassure you that your data is going to be safe, but it will also explain how the safety measures implemented guarantee your safety.

You are not going to make any profits using this bot. No algorithm or code’s running in the background, and there’s no technology behind this bot helping you trade. It’s just a webpage that’s designed to trick you into believing that you’re participating in the crypto trade, and the person behind this is making big bucks out of it by stealing your deposits.

Based on the reasons mentioned above, it can be safely said that the BTC Prestige bot is, in fact, a scam. The main goal of making this site was to trick people and steal their deposits and personal information. To sum it up,

Please don’t blindly follow and give into scams like these. Do your research before investing your money anywhere. Many other bots are both reliable and safe for use, including Bitcoin Up, Bitcoin Code and CryptoTrader, etc. Now, after so many years, trading platform has made its way towards the world’s most trusted online investment platforms